Warwick. Season ended strong in spite of late start and some poor weather. 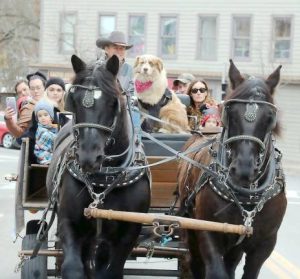 Sean Giery and his team of Percherons, Jack and Bob, were in the Village of Warwick again with their mascot “Butch,” who enjoys riding shotgun. And visitors bundled up and took advantage throughout the day of a free horse and buggy ride through the village. Although there were a couple of days of poor weather, five out of seven scheduled Horse and Buggy Rides were packed.

Thanksgiving, the holiday that occurs just before the kick off of downtown Warwick’s annual celebration of Home for the Holidays, came late this year.

And to make matters worse, there was rain, a rare heavy downpour during most of the day, for the opening day of that celebration.

But the economy was strong, consumer confidence high and a commitment to shop local that ended with another very successful year for local businesses.

“It was incredible,” said Merchant Guild President and Home for the Holidays co-chair Corrine Iurato. “And the final count is not in but I believe my store, Peck’s Wine and Spirits, along with Newhard’s and Frazzleberries, sold close to $20,000 in merchant gift certificates.”

Iurato also reported that in spite of another day of poor weather, five out of seven scheduled free horse and buggy rides took place.

“And they were all packed,” she said.

Bob Maxwell, co-owner of Style Council and Blue fashion shops, described this year as, par for the course thanks to their loyal clientele, selection and personalized service.

Jerry Schlichting co-owner of Frazzleberries, reported that although this Home for the Holidays was short and the weather didn’t always cooperate, it was another successful season.

“It got off slowly,” he said, “but finished strong. It had us all on edge but we made up for it.”

“Even with the short season and a couple of days of poor weather, it was a successful season,” he said. “Our strength is that we’re local and people love the rich experience of shopping here, especially during Home for the Holidays with our horse and buggy rides, holiday music and decorated store windows. Warwick has become a shoppers destination and people travel from Sullivan County as well as New Jersey and elsewhere to shop here.

“And,” the mayor added, “the shop local spirit has never been stronger.”