Chamber will present tribute awards this Saturday during annual membership dinner to the founding five businesses that have maintained membership for 80 years. 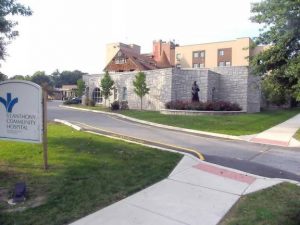 St. Anthony Community Hospital, which begin with the first hospital in this community, established in 1916 by Dr. M. Renfrew Bradner Sr., is one of the five founding businesses that created what is now the Warwick Valley Chamber of Commerce. ( File photo by Roger Gavan)

The Warwick Valley Chamber of Commerce is marking its 80th anniversary this year with a membership celebration this Saturday, Nov. 16, at Minerals at Crystal Springs Resort in Vernon, N.J

During the evening Chamber Board President John Redman will present tribute awards to the founding five businesses that have consistently renewed membership for 80 years.

The chamber’s original certificate of incorporation for what was then named The Warwick Board of Trade, Inc. was signed and dated Jan. 19, 1939. That name was changed to Warwick Chamber of Commerce in 1951.

The Warwick Advertiser has been publishing a series of articles profiling each of the founding businesses, including Seely and Durland and the Warwick Valley Telephone. The remaining founders are Parkin Supply – Plumbing & Heating, St. Anthony Community Hospital and Sanford Insurance, now known as Broadfield Insurance Group.

Each of these businesses has consistently renewed membership in the chamber for 80 years.

The history of St. Anthony Community Hospital begins with the first hospital in this community, established in 1916 by Dr. M. Renfrew Bradner Sr.

It was called the Warwick General Hospital and was located in the Servin Mansion on Forester Avenue.

A 21-bed facility, the Warwick General Hospital served the local residents until 1939, when the Franciscan Sisters of the Poor came to Warwick and saw the need to provide extended health care to the community.

In 1937 they purchased a three-acre estate that included a stone residence with 18 rooms located a short distance from Mount Alverno, then a convent and retreat house for the nuns.

Two years later, in April of 1939 the cornerstone was put in place and St. Anthony Community Hospital opened its doors to admit its first patients.

It’s capacity then was 48-beds.

By the end of that year the new hospital had provided care for 293 patients, delivered 33 babies and performed 163 operations.

Today it is a member of the Westchester Medical Center Health Network serving the residents of Orange County and Sussex and Passaic Counties in New Jersey.