Middletown. ‘A cool sport and fun to watch.’ 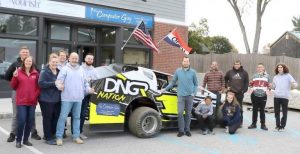 On Saturday, Oct. 26, at 7 p.m. The Computer Guy, which offers an array of computer services for residents and businesses in Warwick, Goshen and Florida, will sponsor a race car in the featured Eastern States Small Block Modified Championship 100 laps race. Posing with family and staff with the small block modifed DNGR Nation race car are Computer Guy Kevin Brand (left) and race car driver Johnny Illanovsky (center of car). ( Photo by Roger Gavan)

And on Saturday evening at 7 p.m. The Computer Guy, which offers an array of computer services for residents and businesses in Warwick, Goshen and the Village of Florida, will sponsor a race car in the featured Eastern States Small Block Modified Championship 100 laps race.

“My family and I,” said Computer Guy owner Kevin Brand, “go up to the Orange Country Raceway at least once a year to watch the small block engine race cars. It’s a fun evening and I always thought it would be neat to see my company name on the side of one of the cars.”

Brand’s idea, he added, was also to support another local business. And he reported how he met race car driver Johnny Illanovsky, a Pine Island resident and founder of DNGR Nation.

“I was having a conversation with John, a co-owner of another small business in Orange County, Catskill Marketing,” said Brand. “Just through conversation John tells me he drives those small block engine race cars for a local racing team called DNGR Nation.

There was a big race this coming weekend and I said I would like to sponsor the car for the race. So here I am, a local business sponsoring two other local business. It’s a really cool sport, and it’s fun to watch.”

For additional information about The Computer Guy call 988-0708 or visit www.thecomputerguy.pro.