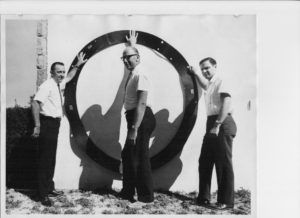 Warwick’s connection to the historic 1969 lunar mission: Mechanical Rubber was commissioned by NASA to manufacture a High Pressure Window Gasket for the Lunar Expedition Module. Here the gasket is displayed at the Warwick plant on Forester Ave. Shown in the photo (from left) is Conrad Morgiewicz & William Arthur. Photo provided

Fifty years ago, the world was glued to their television sets as the United States of America became the first, and to this day only, nation to have a successful lunar landing mission. On July 20, 1969, Neil Armstrong and Buzz Aldrin exited the Lunar Expedition Module (LEM) onto the surface of the moon while Michael Collins orbited the moon in the Command Module waiting for them to return for their successful trip back to Earth. The mission was the first of six lunar landings and visits to the surface of the moon.

Warwick’s own Mechanical Rubber, located on Forester Ave., was chosen to supply a High Pressure Window Gasket for the LEM due to their ability to provide rubber compounds that meet stringent specification requirements. In this way the company was able to play a small part in the history-making mission which is a source of great pride for the company.

Meeting such requirements is a capability the company maintains to this day, having recently been selected to supply mounting pads for the International Space Station. Mechanical Rubber looks forward to continued possibilities to venture into space as visionaries keep their eyes above the horizon.