You are here: Home › Arts › Despite Rainy Start Jazz Fest Bands Played On 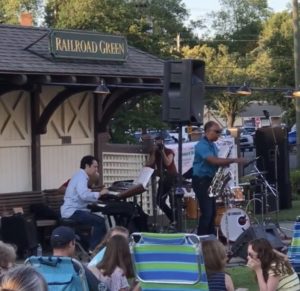 Fortunately, rain did not dampen the rest of the weekend’s festivities. Skies were clear and beautiful at the Warwick Valley Winery on Friday night as the Jeff Ciampa Group entertained on the outdoor patio. Later that evening, Neil Alexander and Nail performed at the Warwick Center of the Performing Arts.

There was something for everyone on Sat., Aug. 10, beginning with Judi Silvano’s Zephyr Band at the Amity Gallery in the afternoon. Early in the evening, The Roland Vasquez Sextet entertained a large crowd while children played at the newly renovated Pine Island Park. However, it was Railroad Ave. where Big Funk with Karl Latham and Don Braden provided “standing room” only entertainment, with lawn chairs not only on the Green, but also shutting down Railroad Ave. Finishing off the day’s events for the late night crowd (or those who just wanted to keep the party going) the Michael Purcell group performed at Pennings Farm and Market.

Sunday morning, the Ravi Tesar Group entertained at The Iron Forge Inn and the Warwick Jazz Festival concluded that evening with a performance by the Tani Tabbal Trio at the UAME Church presented by The Warwick Historical Society.