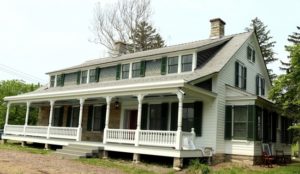 On Saturday, June 1, the public had a unique opportunity to go back in time to Colonial days and the Revolutionary War-era in Warwick.

It was the 240th anniversary of the Battle of Minisink, then commanded by Warwick resident Col. John Hathorn, a surveyor and teacher who later had the rank of general and also served in Congress.

Hathorn and his minutemen

Hathorn had been appointed as colonel of the Orange County Militia in 1776.

His minutemen helped guard the Ramapo Mountains and Sterling Forge, responded to alarms about Native American raiding parties along the Delaware frontier and fought at the Battle of White Plains.

The all-day event was free and featured exhibitions and campsites manned by the 5th New York Regiment and, on the British side, the 42nd Royal Highland Regiment.

Visitors also had an opportunity to learn first-hand from culinary historian, Lavada Nahon, who demonstrated the food and lives of slaves living in this area in Colonial times.

And there were other demonstrations by artisans like blacksmith James Burr who showed his audience that his skill was not making horse shoes, the job of a farrier, but crafting and repairing every iron tool used in the day before machining and automation was invented.

These moments in history were brought to you by:

Warwick’s first Founders’ Day was organized and presented by the Friends of Hathorn House, the Warwick Historical Society, the reenactment regiments and the Albert Wisner Public Library.

The event was sponsored by the Hudson River Valley National Heritage Area.