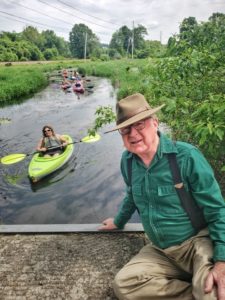 To commence the grand reopening of the Wawayanda Creek’s newly navigable waterway, Warwick residents grabbed their kayaks and canoes and joined community members and nature enthusiasts alike for a great kayak paddle from Wickham Lake to Memorial Park in the Village of Warwick on Sun., June 2.

Fifty kayakers and 45 crafts were launched into the creek at the former prison grounds in Wickham Woodlands and journeyed a distance of approximately five miles coursing through winding bends beneath canopies of greenery amongst an array of wildlife.

Selfless volunteers from Community2gether, known as the ‘Creek Clearing Committee,’ worked from kayaks and rowboats clearing the creek’s banks for months in preparation for the event. While the first run-through took organizers seven hours to complete, kayakers finished the expedition in less than two hours this past weekend thanks to the dedicated group of volunteers who worked hard to clear the path. All kayakers are required to wear life preservers by New York State law.

Warwick Historian Dr. Richard Hull, who was on board throughout the day keeping watch and helping committee members assist kayakers along the route throughout the paddle, explained that he had never seen anything like this event in his 70 years of living in Warwick. He referred to it as a historic moment, calling the creek’s route a chain, linking the valley and the people who live along it together the way Native Americans once attached significance to it all.

“There are a number of objectives and goals here. What I see here is a re-emergence and a rediscovery of this area, and it’s more than just having fun and recreational. It will hopefully bring attention to the fact that this is an important watershed through here. We have to be aware of its importance, protection, and stewardship. It’s not just about having fun here in the future as a tourism attraction, but it’s critical to protecting the water purity for us and for future generations,” said Dr. Hull.

Marty Hayes, a member of the clearing committee, helped assist kayakers into the creek and at the bridge located on Chancellor Ln. with committee volunteer Walter Ross.

Hayes said, “It was a long, hard process getting to this point, but it’s something that the community will enjoy for a very long time, it’s an amazing route to kayak through. There are beavers slapping their tails, muskrats, deer and herons. The weather is going to dictate when kayakers will get to venture out. In the summer the growing weeds might make the route impassible. Special thanks to Chris Knapp Construction and his men for all their efforts and helping with his tools. ”

Geoff Howard of Community2gether and organizer of the Great Wawayanda Kayak Paddle, could not have been happier with the turn out and great weather. He sent a huge thanks to the Town DPW and to all of the volunteers of the clearing committee who played such a huge role in making the day possible.

“Warwick has one more wonderful asset to go with all the others,” said Howard.

The kayak paddle ended at Veterans Memorial Park in the creek off of Forester Ave. As kayakers rowed in, they were greeted by family, friends, and committee members. People were asked to share their feedback on the paddle route to ensure a safe and enjoyable experience for all. Committee members were happy that everyone had positive things to say and graded the paddle a ten out of ten.

One of the kayakers suggested that having markers placed throughout the route would make it easier for people to stay on the right track, commenting that a map of the route may be helpful to kayakers in the future.

Dr. Hull and several committee members noted that signs should be posted at the bridge on Chancellor Ln. to warn kayakers of the clearance under the bridge as travelers occasionally have to lean all the way back in order to navigate underneath.

Warwick Councilman Russell Kowal discussed the project and the clearing process at the Town Board meetings for the last few months, and he was very pleased with the outcome of the event.

“It was a great experience, lots of wildlife to see and a lot of really nice quiet spots. We appreciate all the volunteers who worked so hard to clear the stream to make it possible. That’s what makes things work in Warwick. It’s the people. We have a need and people come almost out of nowhere and help out,” said Kowal.

The event was held in celebration of the navigability of the creek as this means the waterways are open and legally accessible to anyone under the common law right of the public to travel on state waterways, reaffirmed by the New York State Court of Appeals in 1998.

However, the stream winds through the backyards of many property owners, and project organizers said there were some complaints from residents concerning noise. Signs were put up along the waterway by one resident that read, “Residential Area, Please Move Through Quickly and Quietly.”

Now that the Wawayanda Creek is officially open, the community visioning committee will schedule a follow-up meeting where all suggestions will be considered and improvements can be reviewed and discussed.