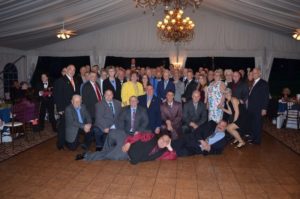 Appreciation for the members of the Warwick Volunteer Fire Department (WFD) was demonstrated during the Warwick Fire Department’s Annual Installation 150th Anniversary Dinner held on Sat., May 4 at the West Hills Country Club in Middletown, NY.

“To the Warwick Fire Department, our neighboring departments, and most of all to our families – we would like to thank you for allowing us to spend countless hours helping our community, whether it is responding to emergencies, training or providing our residents with a great carnival, fireworks display, teaching the children fire safety, or honoring the fallen at the 9/11 memorial ceremony – our Department shines with the brightest of colors,” said WFD President Melissa Stevens.

Stevens, along with Phil Cialella, the Chief of the Fire Department, were the hosts of the event that featured a presentation by Orange County Fire Coordinator Vini Tankasali; a video about the WFD; swearing in of the chiefs, line officers, safety officers, wardens, and the executive board by Warwick Town Supervisor Michael Sweeton; as well as a certificate of appreciation to the Warwick Fire Police and a proclamation from Village of Warwick Mayor Michael Newhard in honor of the WFD’s 150th Anniversary.

“I can’t thank you all enough for 150 years of service to the community. It’s been an incredible journey personally for me as Mayor over the past 19 years. I have learned a lot from you and I thank you all very much,” said Mayor Newhard.

Supervisor Sweeton also spoke to members of the WFD saying that “from all of the residents of Warwick, we thank you for what you do.” The WFD then held a moment of silence in remembrance of Wayne Stevens from the Raymond Hose Co., who passed away in 2018.

The highlight of the evening was an awards ceremony honoring firefighters, members, and their families for their dedication and service to the community. For their extraordinary long-term service, awards were presented to Frank Cassanite and Rich Quackenbush for 50 years of service, Don Coates for 58 yrs.; Phil Brady for 59 yrs.; John Batz and Frank Fotino for 60 yrs.; Ed Carr, 61 yrs.; and to Buzz Joslyn for 62 yrs.

Other numerous awards were presented throughout the evening. After the presentations, everyone enjoyed dancing to music by DJ Patrick from Digital Musicians Entertainment, and they all look forward to attending the event next year.