You are here: Home › Community News › Third annual Too Good to Toss event continues to be a success 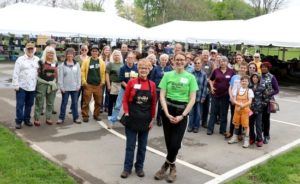 Photos by Roger Gavan Co-chairs, front from left, Elizabeth Knight and Payton Swenson with many of the volunteers who helped make Too Good to Toss another success.

The third annual “Too Good to Toss” community swap sponsored by Sustainable Warwick, with the cooperation of both the Town and Village of Warwick, was held last weekend at Stanley-Deming Park and declared another success.

The Village and Town of Warwick split the cost to rent tents, tables and chairs, to be set up, as in previous years, on the basketball court in Stanley-Deming Park.

On “Donation Day,” Saturday, May 4, everyone was invited to drop off their no longer wanted but too good to junk items that were sitting unused in basements and garages.

Items ranged from artwork, baby and children’s gear and bicycles to non-upholstered furniture, housewares and toys.

Donations had to be clean, in good repair and in full working order including all parts.

Donors, however, were asked not to bring a list of unacceptable items listed on the Sustainable Warwick Website including computers, TVs and large appliances.

By late Saturday afternoon the fenced in area of the basketball court at the park was filled and the donations had been well organized by 85 volunteers.

“These people of all ages were positive, welcoming, respectful, flexible and so helpful over this weekend,” said volunteer coordinator Samantha Scalpone. “Many had volunteered in previous years. In addition, many Saturday volunteers, who had not signed up to work on Sunday, returned to help where we were short-handed. This helped make Too Good to Toss an organized and successful event.”

Although it rained on Sunday, the large tents provided adequate shelter for the items and almost 400 people, somewhat down from last year due to the weather, entered the basketball court early that morning.

They were there to take anything they wanted free of charge.

Items that were left behind were then picked up by the Salvation Army.

And later, the Village Department of Public Works crew took away any trash.

Local donors also contributed to the success of the event.

“I received a donation of $300 from Warwick State Farm Agent Ashish Anand,” said co-chair Elizabeth Knight. “We used his generous donation to purchase breakfast and lunch snacks for volunteers. And Eileen Patterson of Warwick’s Track 7, generously donated the design and printing of our banners.”

The general consensus, as stated by many of the people who came on Sunday, was that it was great that the donations were not simply thrown out and would continue to be of value and much appreciated.

Too Good to Toss will be held again next year at this same time of year.