You are here: Home › charity › Work begins on ADA-accessible playground in Stanley-Demming Park 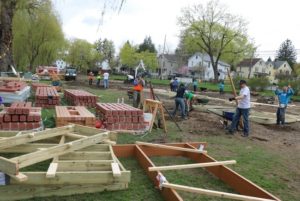 The campaign has achieved its goal. Let the work begin.

There was an occasional rain shower on Monday, April 22, but nevertheless volunteer work crew teams. leaders and construction supervisors from Play By Design assembled equipment at Stanley-Deming Park in the Village of Warwick.

Like a traditional barn raising, they were there that day and throughout the seven-day week to build a new community-designed, and community-built, Americans with Disabilities (ADA) accessible playground.

The project was spearheaded by Warwick Playground Dreams, a committee of volunteers in the Town of Warwick who have been raising funds since 2016 to rejuvenate the aging playground in the park. .

Working together with the village, the schools and playground design architects, Play By Design, are realizing the committee’s goal to bring an ADA-accessible playground to Warwick that will exercise the imaginations of all of Warwick’s children as well as their muscles.

The goal, which they achieved, was to raise $350,000 and enlist approximately 200 volunteers, skilled or unskilled, for each day of the build.

Those who stepped up to the plate to volunteer included members of the Warwick Valley Chamber of Commerce, local businesses, organizations, churches and individual citizens who signed up for each day.

“This is a moment when we, as a diverse community, come together to pick up a shovel, a hammer, a drill and assemble a playground that allows kids with many levels of physical challenges to play with their friends,” Warwick Mayor Michael Newhard said.

In an effort to raise funds and enlist volunteers, WPD Vice President Megan Cardenas recently spoke at all the Sunday masses held at the Church of St. Stephen, the First Martyr.

She updated the parishioners about the current status of the playground initiative and shared her own personal story, which motivated her to fundraise for the playground for the last two years.

“This project is dear to my heart as I have two boys who currently can’t play together on the playground,” said Cardenas. “My eldest loves to climb and run, and he will love the more challenging equipment coming in the new design. However, my youngest has Spinal Muscular Atrophy, the pediatric form of ALS, and is on a vent, needs nursing, and uses a wheelchair. Currently, he can only watch his brother play on the playground. After the playground is built, he will finally be able to join his brother and play too.”