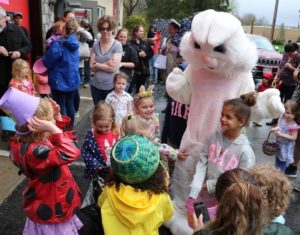 The Easter Bunny was on hand to greet the children and pose for photos.

When the National Weather Service predicted a 90% chance for heavy rain on Saturday, April 20, the organizers of the 12th annual Village Easter Egg Hunt had to come up with another plan, which they did.

When the forecast turned out to be true, they moved the event from Veterans Memorial Park to FireHouse Station No. 1 on Church Street Extension.

The annual Village Easter Egg Hunt is co-sponsored by the Warwick Volunteer Fire Department along with the Village Recreation Department.

The move indoors was the first time weather was a serious problem, but it still continued the tradition.

It was also the seventh year that the sponsors had a food drive to help the Warwick Valley Ecumenical Council Food Pantry.

Participants were again asked to bring a non-perishable food donation, which members of the Warwick Fire Department Auxiliary collected in boxes to be delivered to the Food Pantry office at the United Methodist Church.

After moving the fire apparatus outside, volunteers placed over 5,000 candies on the floor of the firehouse.

The good news about the indoor hunt was that it provided easier access to the eggs and candies during the hunt, so that the children were able to fill their baskets.

The Easter Bunny was also on hand to greet the children and pose for photos.

About 15 minutes before the start of the hunt, all the children were lined up outside the doors to the firehouse in three age groups: 7-12, 4-6, and three and under.

Moms and dads were permitted to help the toddlers and everyone else enjoyed watching the children.

After last minute instructions by Fire Department President Melissa Stevens, and a countdown, the three fire house doors were raised and the children were off and hunting, not only for the ordinary goodies, but also for three “golden eggs,” one for each age group. And each one of these entitled the lucky child to a special gift bag.