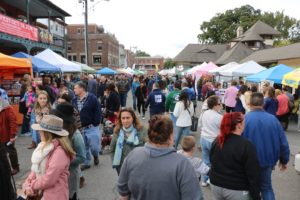 Photos by Roger Gavan The view from Railroad Avenue: It may have been a little on the cool side with partly sunny skies but nevertheless the crowds came out, especially in the early part of the day.

Except for the very first Applefest, which was almost wiped out by Hurricane Hugo, and an occasional cloudy or cool day, Applefest, Warwick’s largest and most wella-ttended event, has always enjoyed good weather

And the 30th celebration of Applefest on Sunday, Oct. 14, was no exception.

It may have been a little on the cool side with partly sunny skies but nevertheless the crowds came out, especially in the early part of the day.

This year’s event played host to about 275 craft and food vendors and there was free entertainment, children’s rides, the traditional apple pie baking contest and a pie-eating contest sponsored by Noble Pies.

The traditional festival has been held since 1989 to celebrate the local apple harvest.

The popular festival, produced each year by the Warwick Valley Chamber of Commerce, is a major fund raiser and much needed proceeds from the event are used for town-wide community projects and non-profit organizations.

In spite of the magnitude of the event, the largest in Orange County and one of the largest in the Country, Applefest is surprisingly cost effective.

Members of non-profit organizations perform numerous tasks before and after the event.

Applefest earns its keep by renting space to vendors and organizations and by sharing the amusement income with the company that provides the rides. Most of the non-profit organizations serve food or sell retail items. And for many, Applefest is the major fund raiser for the entire year.

Although the day can be an inconvenience to some residents, the monies earned are used to support valuable services for everyone throughout the year. And many of these services would normally have to be paid with additional taxes or donations.