You are here: Home › News & Updates › Noble Pies marks its 10th anniversary with a celebration and raffle 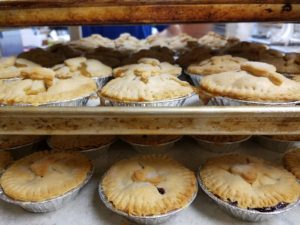 Provided photo In celebration of its tenth anniversary, Noble Pies will raffle off a 12-month Pie of the Month gift certificate. Contestants need only post a photo on Facebook or Instagram of their favorite fruit, cream or savory pie baked at Noble Pies, stating why it’s their true home slice and tagging the bakery – @NoblePies. The deadlne is July 31. The winner will be announced Aug. 3.

This July marks 100,000 pies baked in the ten years since Leslie Noble and Tom Herman first ignited their ovens as resident bakers at Noble Pies in Warwick.

Noble and Herman pride themselves on including locally sourced and seasonal ingredients in their delectables. It can be said that the robust menu is truly plant-to-pie.

When baking at Noble Pies, starting from scratch doesn’t just begin on the cutting board. These bakers are known to moonlight as farmers, growing fruits, vegetables and herbs that can be found as key ingredients in a number of their baked goods. All noble efforts are made to include as many locally sourced ingredients into their recipes as are available.

Apple pie may seem as if it’s on every bakery menu, however there is nothing common about this orchard grown favorite at Noble Pies. What is commonly known as the forbidden fruit was never daunting to these bakers. In fact, their Apple Pie entry in the 2008 Applefest Apple Pie Baking Contest earned an award and set the course for the next ten years. They may have entered as amateurs, but these Warwick bakers now reign supreme … or Noble, some may say.

The raffleIn celebration of the tenth monumental anniversary, Noble Pies will raffle off a 12-month Pie of the Month gift certificate. Contestants need only post a photo on Facebook or Instagram of their favorite fruit, cream or savory pie baked at Noble Pies, stating why it’s their true home slice and tagging the bakery – @NoblePies.

Entries will be accepted through the Noble Pies Facebook and Instagram pages and at Noble Pies through July 31. The winner will be announced Aug. 3.

The story behind the businessHoning her baking skills from her Grandmother Fowler, Leslie Noble has been baking her entire life and discovered she shared this passion with her husband and baking partner Tom Herman.

Until the ribbon was presented to them at the 2008 Applefest Apple Pie Baking Contest in Warwick, most of their fresh-baked pies and other delectables were gifted to friends and family.

With a winning reputation, the hobby for this couple took-off overnight, stirring up enough demand to open a retail bakery where an unexpected menu of made-from-scratch items are offered.

In addition to the menu of more than 30 fruit and cream dessert pies, the hometown bakery offers a variety of savory pies, better known as Pot Pies, popular as heat-and-eat one-dish dinner wonders.

The expansive menu of sweets for all tastes includes cookies, scones, breads, muffins, quiche and specialty items such as coffee cakes and Polish-style babka.

Any of the pies can be made Gluten Free and there is always a selection of cookies and/or muffins prepared gluten free.

Noble Pies are stuffed with locally grown and raised ingredients from area farms including Och’s Orchard in Warwick, Dan Madura Farms in Pine Island and Banbury Cross Farm in Goshen.