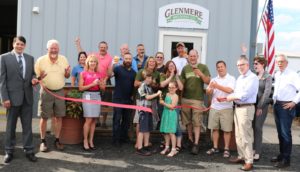 July marks the second anniversary of brewing craft beer at Glenmere Brewing Company, located at 55 Maple Ave. in the Village of Florida.

On Thursday, June 28, Town of Warwick Supervisor Michael Sweeton, Florida Mayor Daniel Harter Jr. and members of the Warwick and Florida Chambers of Commerce joined the Sandor family, their relatives, friends and associates for a ribbon-cutting ceremony to celebrate the occasion.

The Glenmere Brewing Company, named after the lake from which the brewing water comes, is known to produce a signature flagship and one-off brews using proprietary recipes, locally grown ingredients and collaborative efforts with local growers and brewers.

This weekend will feature live music including Stereo Mike on Saturday, July 7, from 3 to 7 p.m.; and Moonshine Creek Bluegrass Band, the following day, July 8, from 2 to 6 p.m. as part of the weekly Sunday bluegrass sessions.

Brewery visitors can either dine on visiting food truck fare or can order in from area restaurants and enjoy lunch or dinner in the indoor and outdoor dining areas.

A variety of Glenmere brews can also be found on tap at bars and restaurants throughout the Hudson Valley.