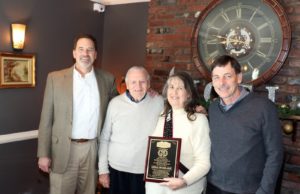 Working a long time for the same company is unusual in today’s business world.

But on Monday, Jan. 15, Seely & Durland Insurance, which has also been around for about 85 years, held a luncheon and celebration at the Warwick Inn to honor Claims Manager Linda Decker, for her 50 years of service to the firm.

Having spent her entire career with Seely & Durland, she took over the vital position of claims manager in 2007 and has since dedicated her time to handling all first and third party claims.

When asked why she remained with the same firm all these years, she replied, “I liked it.”

That may be why Decker enjoys a more than 99 percent favorability rating from the company’s Insurance’s clients.

“The favorite part of my job,” she added, “is working with clients to help navigate them through their claims and ultimately make their lives easier.”

Her fellow workers and managers refer to Decker as “Our rock star.”

Decker graduated from Warwick Valley High School in 1968. She and her husband Steve are lifelong residents of Warwick where they raised their sons Jason, David and Scott.

“Linda is an employer’s dream,” said Stuart Durland, vice president of operations. “Start young, work hard, keep customers happy, have an impeccable work habit and remain dedicated to a business for 50 years. We can’t thank Linda enough for all that’s she’s done, and will continue to do for Seely & Durland and our clients!”

Garrett Durland, president of the firm, reported that clients have expressed their appreciation for Decker’s effectiveness, kindness, responsiveness and patience when expediting a claim.

“Linda has been such an important part of Seely & Durland for five decades,” he said. “Who experiences that kind of loyalty anymore? She joined the firm while still in high school and was so important to our Dad, Ken Durland, after we lost our grandfather and founder in 1966. Moving into the important role of claims manager. We are so thankful to have had Linda’s expertise and consistent good nature to grace our office all these years!”