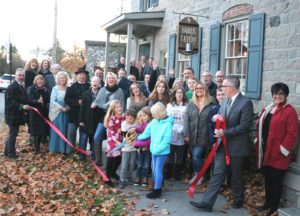 Photo by Roger GvanOn Thursday, Nov. 16, Town of Warwick Supervisor Michael Sweeton (far right), Mayor Michael Newhard (far left) and members of the Warwick Valley Chamber of Commerce joined Adam Powers (rear right), his staff, officials and members of the Warwick Historical Society and their families and friends to celebrate the official grand opening of Baird’s Tavern with a ribbon-cutting.

Have a beer where George Washington once sipped grog in 1783

The historic Baird’s Tavern at 103 Main St. in the Village of Warwick is now opened to the public as an old-time tavern.

The owner of the building, the Warwick Historical Society, recently signed a 20-year lease with John Barounis and Adam Powers, owners of Fetch Bar and Grill, also on Main Street, to operate three rooms in the ground floor as a Colonial-style tavern.

The historyBuilt in 1766, the stone building was the home of Francis Baird, who owned an inn, a store and, of course, a tavern.

He hosted George Washington, then commander-in-chief of the Continental Army, in 1783.

Martha Washington also stayed on the building’s second floor, on her way to see her husband at his Newburgh headquarters in 1786.

And Revolutionary War militiamen trained on the building’s top floor.

‘Cage beer’Tavern patrons can now relax and enjoy liquid refreshments and snacks at a full bar, a replica of an old time “Cage Bar,” offering 10 beers on tap along with wines and spirits. Seating is also available in two other rooms, including a game room where guests will be able to take games off the wall and take part in friendly competition.

Powers praised Warwick architect Joe Irace who not only designed the remodeling but also shepherded the project through every step of the entire village approval process.

Baird’s Tavern has started a special membership that will include custom engraved pewter mugs and privileges such as drink discounts and admission to special events as well as a membership to the historical society.

“In Fetch,” said Powers, “we contribute to the Humane Society. Here, our direction will be to help the Historical Society.”

Essential informationBaird’s Tavern is open Monday through Friday from 4 p.m. and Saturday and Sunday from 1 p.m. to closing.