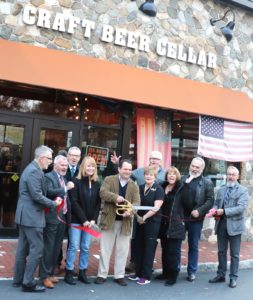 Craft brewers are defined by the Brewer’s Association as those that are small, independent and traditional.

The story of craft beer and the evolution that has unfolded over the last four decades goes back to the mid-1970s when there were fewer than 40 breweries in the United States.

In addition to its large selection of craft beers, the Craft Beer Cellar has also introduced the Crowler, a 32-ounce sealed can that can be filled with fresh draft beer and then sealed with a lid and taken out.

Besides owning and managing the Craft Beer Cellar with his wife, Maggie, Keller is also a financial planner and owner of Keller Wealth Management Group, LLC. But he said that he has always been fascinated by the chemistry of the beer making process and the real craftsmanship that goes into every single-batch and barrel of beer that is brewed.

“These past three years on Main Street in the beautiful Village of Warwick, really seem to have flown by,” said Keller. “We couldn’t be more happy and grateful to all of our wonderful and loyal friends who patronize us on a regular basis. It so nice to see those same smiling faces on a consistent basis, as well as new smiling faces every single day. It has been such a pleasure, and we are extremely grateful to be a part of such a vibrant and fantastic community”

For additional information call 544-7688, visit www.craftbeercellar.com or go to facebook.com/cbcwarwick.