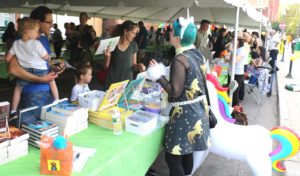 Some of the authors and illustrators, like Ame Dyckman, wore hats and costumes that portrayed the themes and subjects of their writings and illustrations.

The sixth biennial Warwick Children’s Book Festival, held on Saturday, Oct. 7, on Railroad Avenue in the Village of Warwick, drew record crowds and by all accounts was a huge success.

The free admission event, presented by the Albert Wisner Public Library, the Village of Warwick and primary sponsors Glenn and Susan Dickes, featured more than 60 authors and illustrators of children’s books for grades Pre-K to 12.

And many of the authors autographed their books. Some also wore hats and costumes that portrayed the themes and subjects of their writings and illustrations.

“We raised a little over $7,000 for the library,” said Tom Roberts, owner of Ye Olde Warwick Book Shoppe, which served as the bookseller, “and although I haven’t run a report yet, I estimate we sold at least 2,000 books in the space of five hours. No matter how you look at it, it was the most successful Children’s Book Festival to date.”

Roberts had donated 25 percent of the proceeds from the book sales to the library.

Rosemary Cooper, director of the Albert Wisner Public Library, said that the funds would be used to help support upcoming programs offered by the library. But she stressed that the primary purpose of the Children’s Book Festival was to encourage literacy at an early age.

Cooper also praised Glenn and Susan Dickes for their generosity in funding all the expenses involved in presenting the event at no cost to the Library or the taxpayers.

The Warwick Children’s Book Festival, which is attended by families from all over the Hudson Valley, began in 2005 and except for an interruption during the building of the new library, has since been held every other year.