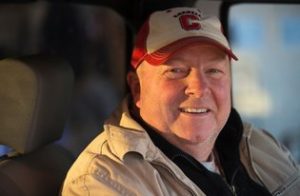 Photo from New York Times’ article “In Warwick, N.Y. at Pennings, Finding Ways to Keep Them Down on the Farm”.
https://www.nytimes.com/2015/02/22/nyregion/in-warwick-ny-at-pennings-finding-ways-to-keep-them-down-on-the-farm.html

Farmers in Orange and Ulster counties joined forces Friday to fill a tractor trailer with fresh fruits and vegetables for victims of hurricanes Harvey and Irma.

A year after a drought plagued the region, farmers had a good growing season this year, and they wanted to share their surplus.

“We’ve been blessed with a great crop this year,” said Steve Pennings of Pennings Orchard and Farm Market, a family-run operation in Warwick. “Last year, we wouldn’t have been able to do this.”

The farmers turned to Maire Ullrich, agriculture program leader at Cornell Cooperative Extension of Orange County, who coordinated the operation and arranged for Feeding America to provide the tractor trailer. Donations were collected at Modern Produce in Pine Island before heading south.

The farmers first got the idea after Hurricane Harvey devastated Texas, but Ullrich said Feeding America would decide if this food goes to areas hit by Harvey, Irma, or both.

The farmers were asked to give so-called “hard crops” – apples, potatoes, cabbage, onions, carrots and others that could last a week at room temperature.

Mark Rogowski, who grows onions and mixed vegetables at his O&R Produce Farm in Pine Island, said there was plenty to give.

“The weather was a one-in-10-years type this year,” Rogowski said. “Cool temperatures and adequate rainfall.”

“The weather has been pretty favorable this year, so I think the farmers are feeling pretty generous,” she said.

She credited Pennings with the idea.

“It’s the least we can do,” Pennings said. “It was very little sweat off our backs. Our employees were happy to help.”

Farmers donated 20 pallets of fruits and vegetables, enough to fill the tractor trailer. Ullrich estimated that translated to 15 to 18 tons of food.

Ullrich said similar collections are happening around the state, including in Albany, Buffalo and the Finger Lakes region.

If there’s enough interest, there might be a second local truckload shipped next week from Ulster County, she said.

Pennings figures farmers in the South would do the same if the situations were reversed.

“If a hurricane hit up here, I hope they’d send us some oranges and tomatoes,” he said.