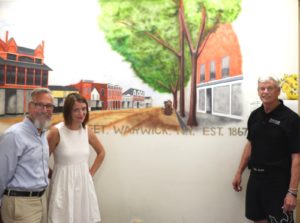 The long awaited 150th anniversary or Sesquicentennial of the incorporation of the Village of Warwick in August 1867 has finally arrived.

A yearlong series of celebration events actually began this year with an apple drop on New Year’s Eve.

But now the official four-day celebration and ceremonies will begin next Wednesday, Aug. 2 at 7 p.m. with a ribbon-cutting on Railroad Green followed by a dance party.

The Village of Warwick was originally a hamlet of the Town of Warwick. And it was a somewhat insignificant one at that time when compared with more commercially viable hamlets like Bellvale, Florida and New Milford.

That was until the 1860s when the new Warwick Valley Railroad choose Warwick as its headquarters. The hamlet soon became a thriving business center and in 1867 it was incorporated as a village.

And since early accounts of the history of Warwick believe that “Warwick,” was named after Warwickshire, England, joining Mayor Michael Newhard in the opening ceremony and events that follow will be Stephen Cross, the mayor of Warwick, England, the county town of Warwickshire, and his wife, Christine, who served as the previous mayor.

During the week a Board of Trustees (youngsters appointed in 1967) will also be in charge of opening a time capsule buried at that time at the entrance to Memorial Park.

The 1967 time capsule will be on display at Legion Hall. It will be replaced by new time capsules, to be opened in 2067, the Village of Warwick’s Bicentennial.

On the last day of the scheduled events, Saturday, Aug. 5, there will be a parade at 4 p.m. beginning at Park Avenue then to South Street to Clinton Avenue to Linden place to Oakland Avenue and Main Street past Warwick Village Hall and ending at Veterans Memorial Park.

The ceremonies will conclude with a free barbecue, live music and fireworks. All are invited.