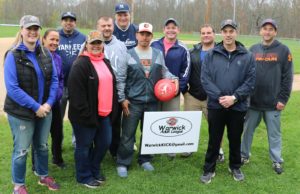 Photo by Roger Gavan Members of the new Warwick Kickball League are looking forward to the upcoming season.

A new event, which promises to be fun for the entire community, will also support underprivileged families.

“This is on the coat-tails of sport that back in the day was held from the early spring into the summer months,” said organizer Carl Short. “That was Men’s Softball where everyone went down to the fields to watch their dad play. Unfortunately, we don’t have enough teams this year to keep up this timeless transition.

“However,” Short added, “we have found an opportunity to bring back that same community spirit while helping to kick hunger out of our community by supporting the Warwick Ecumenical Council Food Pantry and Backpack Snack Attack.”

Kickball is a league game, similar to baseball.

As in baseball, one team tries to score by having its players return a ball from home base to the field and then circle the bases; while the other team tries to stop them by tagging them “out” with the ball before they can return to the home base.

Instead of hitting a small, hard ball with a bat, players kick an inflated rubber ball and this makes it more accessible to everyone with or without special athletic abilities.

Unlike men’s softball, however, Warwick Kickball will be a family night and the league welcomes both husbands and wives to form co-ed teams. The evenings will also feature a barbecue and games for children.

There are nine or ten players on each team but 15 or 16 are needed to sign up to accommodate individual schedules.

The opening night is May 26 and the goal for the first season, which ends mid-July, is eight to ten teams.

“But we will form two leagues if we have to,” said Short.

Proceeds from fees and additional donations of non-perishable food will go to help support Food Pantry and Backpack Snack Attack.

For additional information, fees and forms to be filled out visit Warwick Kickball Adult League on Facebook or email: warwickKICK@gmail.com.