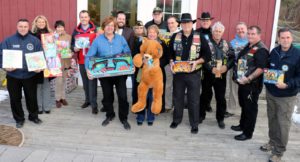 On Friday, December 9, contributors to the first annual Toys for Military Tots toy drive assembled at the office of Orange County Community Radio WTBQ (1110 AM/93.5 FM) to celebrate the success of the program and the distribution of the toys.

The program was launched this November by station owner Frank Truatt and station manager Taylor Sterling, who had conceived the idea after speaking with Orange County Executive Steven Neuhaus about the needs of the children of our military, both active duty and those of disabled veterans.

Outpouring was ‘amazing’The station then teamed up with numerous organizations to help support this toy drive. And drop off boxes were located throughout the county as well as at the WTBQ office.

“The outpouring from the county was amazing,” said Sterling. “The concept conceived with Steve Neuhaus has surpassed all of our expectations.”

“The happiness these toys will bring to these children of the military on Christmas morning is truly a outpouring of love and caring from everyone in Orange County,” said Sterling. “Thank you all. This toy drive really took on a life of its own. The spirit of giving back is contagious and we will continue that feeling as WTBQ begins its Coats to Warm Military Families in January. We are asking for gently used or new coats for babies through adults of every size, male and female. Frank and Taylor of WTBQ want to take this time to thank you all and wish everyone a very Happy and Healthy Holiday.”