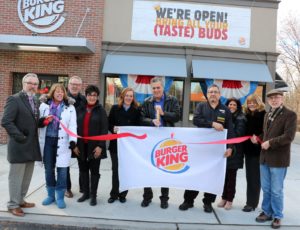 The Burger King Restaurant at 80 Oakland Ave. in Warwick is now fully reopened for business after being closed to complete extensive renovations.

Co-owner Mike Wallstein was away on business and not available for the ceremony.

The festivities that day included special discounts, giveaways and a raffle for a new mountain bicycle.

The Warwick Burger King was originally opened in December 1985.

The newly renovated facility has been extensively updated and incorporates special features to compliment and reflect the village’s historic district.

Owners Paterno and Wallstein worked closely with the Warwick Architectural Review Board to make certain that the building captured the essence of the downtown district.

The business employs more than 30 people.

Burger King Warwick opens each day at 6 a.m. and closes at midnight Sunday through Thursday and at 1: a.m. on Friday and Saturday.

The restaurant is currently offering numerous special deals to help celebrate its Grand Reopening including two Whopper Combos for $10 and two Croissand’wich for $4.00.

“Make sure to stop by and enjoy a Whopper Sandwich in our new restaurant,” said Cevallos.