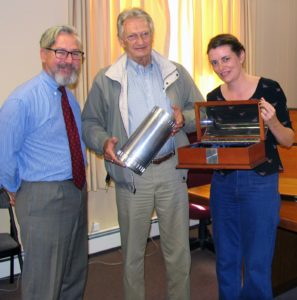 Photo by Roger Gavan On Oct. 21, David Brandt brought a time capsule that he had designed to Village Hall, which he donated for the upcoming Sesquicentennial. From left, Mayor Michael Newhard, David Brandt and Project Coordinator Mary Collura.

The Village of Warwick will celebrate its 150th anniversary – or Sesquicentennial – in 2017 and it will be an all year event beginning as early as New Year’s Eve.

In the 1860s when the new Warwick Valley Railroad choose the quiet hamlet of Warwick as its headquarters, it soon became a thriving business center and in 1867 was incorporated as a village.

Next year, a Board of Trustees, youngsters appointed during the Village of Warwick Centennial celebration in 1967, will be in charge of opening a time capsule buried at that time at the entrance to Veterans Memorial Park.

And they, in turn, will be responsible for appointing a new Board of Trustees and new time capsule, to be opened in 2067, the Village of Warwick’s Bicentennial.

The Village of Warwick would not be what it is today without the passion, energy and vision of Brandt.

Brandt, who had served Warwick as an architect since 1968, was a past president of the Warwick Valley Chamber of Commerce, a member of the planning board and founder of the Architectural Review Board.

He spearheaded the Warwick Beautification Committee and was also instrumental in the organization of the Shade Tree Commission, the establishment of the historic district and the Historical Society’s revolving fund that could be borrowed and used to renovate buildings within that district.

After retiring in December 2010, he and his wife, Ana, moved away from Warwick to live in Europe. They now own homes in both Orastie, Romania, where Ana was born, and in Northern Tuscany, Italy.

But they frequently return for a visit and on Oct. 21 Brandt brought a time capsule to Village Hall that he had designed and patented for special occasions like the upcoming Sesquicentennial.

Historic objects, coins, documentsThe stainless steel cylinder features a tray for coins, various historic metal objects and the like along with a larger container for photographs, newspapers and other documents preserved by a pumping out all the air to create a vacuum.

Years ago Brandt had designed and patented the capsule as a business enterprise. The venture stalled and the capsule was placed in storage.

Now would be a good time, he decided, to donate it for the anniversary celebration.

Members of the Sesquicentennial Planning Committee agreed that the capsule will be much-appreciated next year as well as in 2067.