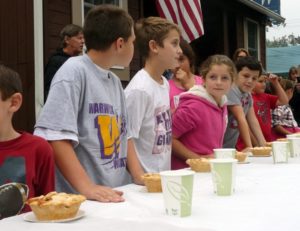 Photos by Louise Hutchison The kids participating in the Applefest youth Pie Eating Contest a few minutes before the start.

For many years, the pie baking contest has been a tradition for local bakers and others in the Hudson Valley. There are divisions for young bakers and amateur adults, and a ribbon is awarded for the most creative pie.

• First place and Most Creative: Riley Persico (only one entry in junior division)

After the contest, the pies are sliced and sold to the public to benefit the Warwick Ecumenical Food Pantry.

This year, the Applefest Committee will present a donation of $246 to the Food Pantry, with proceeds from sales of pie slices and contest entry fees.

After the Pie Baking Contest winners were announced, excitement began to build for the Pie Eating Contest, with a youth competition and an adult competition. The contest requires eating an apple pie during a ten minute time limit, with no hands allowed. The crowd cheered as the contestants dug in and ate their pies as quickly as possible.

Winners of both contests will receive a free pie per month for three months.

Noble Pies, owned by Leslie Noble and Tom Herman, has been making homemade pies since 2008 in the Warwick area.

Their retail location, at 121 State Route 94 S, Warwick, sells a variety of baked goods, with a small cafe serving pies by the slice.