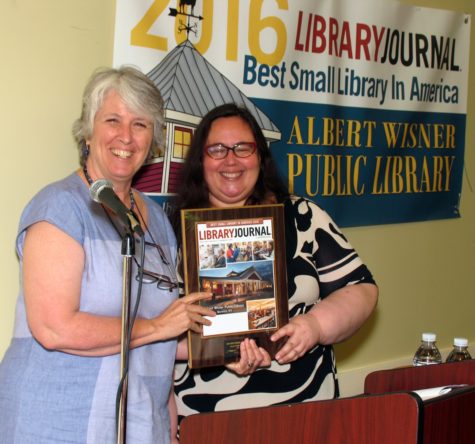 This past April Library Journal Magazine and the Bill and Melinda Gates Foundation awarded the Albert Wisner Public Library as the 2016 Best Small Library in America.

The award, funded by the Gates Foundation, also came with a cash prize of $20,000.

The Library Journal had recognized the Warwick library “for its modernization efforts, leadership in transforming its community, engaged public, and the creative acquisition and introduction of technology and programming to serve varying needs of its patrons.”

And on Sunday, June 12, the public was invited to celebrate this extraordinary national honor at the Library.

There was standing room only as the afternoon festivities began in the Community Room.

Library Board President Donna Applegate first welcomed guests and then introduced dignitaries before an official presentation of the award by Meredith Schwartz, editor of Library Journal Magazine.

That part of the program was followed with a recognition by Library Director Rosemary Cooper of the Community Partners who contributed to the library’s successful application and special commendations from area representatives and leaders including elected officials and members of the Albert Wisner Public Library Board of Directors.

“We usually present these awards at our conventions,” said Schwartz, who appeared with her Associate News Editor Lisa Peet. “But this was a special opportunity for us to be here in this beautiful library with the people it actually serves.”

After the official presentation the 2016 winners of the 10th annual Albert Wisner Public Library Foundation scholarships and the winners of the Best Small Library in America commemorative bookmark design contest were recognized.

And following that program, a cake provided by Jean Claude’s Patisserie in Warwick was served.

Other events that day included a magic show that celebrated the importance of reading, balloon sculptures, a repurposed book craft, activities and crafts for kids in the Children’s Room, a Best Small Library in America Photo exhibit by photographers Bill Neumann, Susan Supak , John DeSanto and others, a book swap, a community art show, and a sale of commemorative baseball hats.

Guests were also asked to bring a non-perishable food donation for the Warwick Ecumenical Food Pantry.