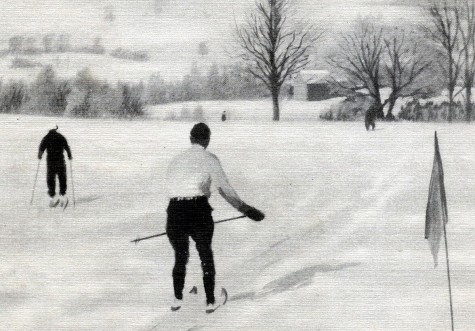 ‘The Friendly One’ is New York’s oldest ski area

As temperatures approached 60 degrees and huge crowds gathered outdoors last Saturday, Feb. 20, it was clear that they couldn’t have picked a better day to celebrate the 80th anniversary of Warwick’s Mt. Peter Ski Area.

The day began with fun-filled events including games for children, races, a rail jam, Max, the Magician, and music by the band “Tangent” along with DJ Jay Bird.

The Hot Spot Grill and the Outdoor Bar were open all day and the spring-like conditions encouraged watching the events while seated at picnic tables or in the outdoor café at Pete’s Pub.

Later in the day they served anniversary cupcakes and champagne for a toast followed by a torchlight parade on skis and a spectacular fireworks display.

Local skiers and snow boarders may find this hard to imagine but there was a time when they would have had to carry their gear and climb to the top of Mt. Peter for the privilege of making each downhill run.

In 1936, R.H. Macy’s Department Store, which had purchased the mountain to promote its fashionable line of ski clothing, developed the ski area and, to the amazement and delight of the skiers at that time, soon introduced a rope tow powered by an automobile engine.

Eventually lifts were installed and Mt. Peter Ski Area became the unique recreational attraction for the Town of Warwick that it is today.

No longer dependent on Mother Nature

In the early days, skiers not only had to be pulled to the top with a rope tow but they also depended on daylight as well as Mother Nature providing all the snow necessary for a good season.

By the 1960s, however, Mt. Peter offered skiers a double chair lift, night skiing and a warm ski lodge at the base of the mountain.

In 1971, Don Sampson, the director at that time of the Mt. Peter Ski School, purchased the resort that he and his wife operated until they turned that task over to their daughters Rebecca and Amy.

In the early days, the Sampsons planted 17,000 pine trees, installed a second chair lift and a beginners tow rope, tripled the size of the base lodge, added a cozy pub, an office, a rental shop, increased lighting and snowmaking and built an outdoor pavilion.

In more recent times they added a high-speed lift and this year, a tubing park.

Described “The Friendly One,” the ski area has long been a favorite of local residents who learned to ski there as toddlers and now drop off their own children for a safe day of winter sports.