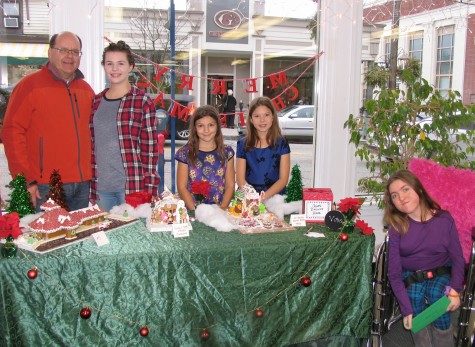 The winners of the 2015 Gingerbread Contests from left, Bridget DeHaan and her father, Chris DeHaan, Caterina “Cat” Pleva, 9, and her friend Brooke Lamb, 9, and Kellie Cusack.

Voting for the fourth annual Village of Warwick Gingerbread House contest ended Dec. 21. And on Saturday, Dec. 26, the winners of the family and individual categories were announced at an award presentation held at Akin’s Pharmacy on Main St..

The winner of the family division, 15 years and older, was Warwick’s “Historic Railroad Station,” by Bridget DeHaan, a sophomore at Clarkson University in Potsdam, and her father, Chris DeHaan, a partner in the Middletown firm of DeGraw and DeHaan Architects.

The creative gingerbread houses, along with the other winners, are all on display in the window at Akin’s Drugstore.

Bridget DeHaan, who is pursuing studies for a career in civil engineering, was also last year’s winner and two years before that had been the first place winner of the Applefest “Pie Contest,” in the junior and then senior division for five consecutive years.

The Gingerbread House project was helped by dad’s design and icing from mom.

The winner of the family division, 15 years and younger, was Caterina “Cat” Pleva, 9, and her friend Brooke Lamb, 9, for their “Animal Groomers” creation.

The youngsters are schoolmates in Vernon, New Jersey.

Each of the winners was presented with a Merchant Guild gift certificate for $40 and all entries were scheduled to remain on display at Akin’s for the remainder of the week.

“They were all wonderful,” said Nicole Respose, chair of the event and owner of Etched in Time. “The winners were decided by the votes of the shoppers during Home for the Holidays. We urge every gingerbread artist to mark his or her calendars for next year’s contest and participate early in this fun event.”