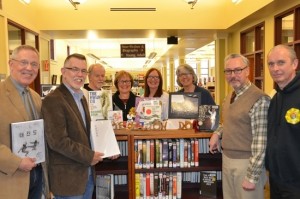 The Chosun Taekwondo Academy has instituted a martial arts book donation program to benefit the Albert Wisner Public Library and the local community at large. In an effort to fill the void on materials relating to the Korean martial art of taekwondo, school owner and Warwick residents Master Doug Cook, Patty Cook and the students of the academy, donated a wide selection of books written by authors the world over, some very rare, focusing on the history, philosophy and culture of taekwondo.

The program was introduced with a free lecture and demonstration, aptly titled Talking Taekwondo, on Sunday, March 22, at the Albert Wisner Public Library.

“Taekwondo is the most popular martial art in the world today with over 90,000,000 practitioners around the globe,” said Cook, himself an award-winning author with four best-selling books on taekwondo to his credit. “Most people equate taekwondo exclusively with Olympic competition. Yet, there are rich philosophical, spiritual and defensive components to the discipline based on authentic Asian martial arts doctrine that are often overlooked. A further misconception is that taekwondo practice is exclusively for children. At this lecture, we will be discussing these aspects as well as demonstrating techniques with twenty-two of our black belt students participating.”

For further information regarding the book donation program or the institute in general, contact the Chosun Taekwondo Academy at 845-986-2288 or visit their web site at www.chosuntkd.com.

Chosun Taekwondo Academy is located at 62 Main Street in Warwick.