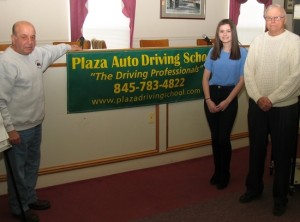 First of all, you can save money and reduce points on your driver’s license.

When you successfully complete this course, you will receive a 10 percent reduction in the base rate of liability, no-fault and collision premiums of your automobile insurance for three years.

And you will also be eligible for traffic ticket point reduction of up to four points.

That means the New York Department of Motor Vehicles will not count those points on your driving record toward license revocation or suspension.

Completion of the Empire Safety Council’s Defensive Driving Course has been demonstrated to reduce accidents as well as any repeat traffic offenses.

Arnott has been with Empire Safety Council, one of approximately 15 different agencies authorized to teach defensive driving in New York State, since May 1999.

The former police officer transferred to the Town of Warwick Police Department from the Village Police Department when both departments merged in 1991. He was promoted to sergeant in 1986. Arnott retired in June 2002.

This class is required by all permit holders in order to schedule a road test. There is an introductory fee of $30 for the first Warwick class scheduled for Sunday, March 29, at 10 a.m. in the Town Hall.

Both courses are held at Plaza Driving School and Warwick Town Hall. Arnott, by the way, is also a driving instructor for Plaza Driving school and also certified to teach the five-hour pre-licensing course for the school.

Plaza Driving School has been in business for more than 50 years.

LaVerdi, who has lived in Warwick with his wife, Patricia, for approximately 22 years, is a former Parent Teachers Association (PTA) president in the Warwick school system.

For times, dates and additional information about the driver education courses call George Arnott at 544-1388, Plaza Driving School at 988-2277, 783-4822 or visit: www.plazadrivingschool.com.