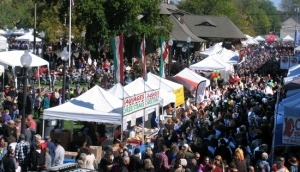 Perhaps it was the picture-perfect weather or the increasing notoriety, but by all accounts the 30,000 to 35,000 estimates for the 26th annual celebration of Applefest last year on Sunday, Oct. 5, needed to be revised upwards.

The Warwick Applefest 2014 Committee just reported that in its most recent accounting, which takes several months to finalize, the proceeds from the 2014 festival raised a record of $87,300 to be distributed to each of the co-sponsoring organizations who plan and produce the event: the Warwick Valley (Doc Fry) Community Center and the Warwick Valley Chamber of Commerce.

However, the larger crowds suggested that the vendors were more successful than usual.

Each year, the festival, which has been held since 1989 to celebrate the local apple harvest, is planned by the Applefest Committee, which includes volunteers from the Warwick Valley Chamber of Commerce, Warwick Valley Community Center and other volunteers.

The rationale Some Warwick residents question the value of the celebration in view of the heavy traffic and other inconveniences during that day.

But here’s the answer: In addition to being the largest fund raiser for the co-sponsors, Applefest is also a major fund-raising vehicle for some 50 local non-profit organizations that serve the community. And because of the money raised by so many local groups at this festival, fewer contributions are requested from Warwick residents during the rest of the year.

The event also supports more than 20 local farmers and food producers who participate.

‘Very important to us’ And the event brings extra business to many local restaurants, shops, bed & breakfasts and inns, apple orchards and wineries and other businesses along the routes into the village. Many who discover Warwick for the first time at Applefest return to enjoy and shop in the town again.

“Applefest is very important to us,” said Karen Thomas, director of the Warwick Valley (Doc Fry) Community Center. “It was a good day for vendors but it also helps support our operations as well as our prevention and children’s programs.”