Buy local efforts, plus coordinated events, made downtown the place to shop 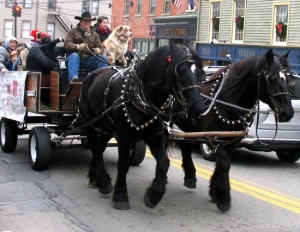 Free horse and buggy rides on Main Street were a big hit. Sean Giery and his team of Percherons, Mabel and The Colonel, were back with their mascot Butch.

Although it was a short season due to a late Thanksgiving, the consensus of downtown Warwick merchants was that “Home for the Holidays” was another big success.

“We had a great holiday season and a very good apple-picking season before that,” said Mayor Michael Newhard, who owns Newhard’s, The Home Source, at 39 Main St. “Warwick is remarkable. People shop locally and the natural decorations downtown make us more special. Everyone gets in the spirit.”

Mary Beth Schlichting, co-owner of Frazzleberries Gift Shop and president of the Merchant Guild, was happy to report an increase in shoppers in her store and from what she hears, in other shops throughout the village.

“We had a late start but it was still a great season,” she said. “People began shopping early, way before Thanksgiving, and there were lots of new faces.”

The Merchant Guild and participating merchants had long been planning a bigger and better holiday season with a host of new ideas to encourage everyone to come on down, shop local and enjoy fun for the family.

Visitors crowded downtown shops, many of which were decorated for the season and offering “open house” events with free refreshments and special offers.

And to get everyone in the holiday spirit, there were fun events throughout the downtown area.

There were days when the Warwick Valley Chorale and later in the season, Jubilate, a co-ed choir, strolled along Main Street and Railroad Avenue, visiting many of the stores and restaurants along the way.

Thanks to the generosity of many business sponsors, the Warwick Valley Chamber of Commerce and the Guild were able to continue offering free horse and buggy rides. And with the decorations, free parking, the third annual gingerbread contest, Santa’s visit, the Angel Tree donations and so forth, Warwick was a fun place to shop.

There was also the fifth annual “Small Business Saturday,” a campaign backed by American Express, which recently reported a national 14.9 percent increase in sales that one day from just a year ago.

Schlichting reported that 12 new businesses have joined the Merchant Guild and that the organization’s members are looking forward to lots of new ideas for the New Year.