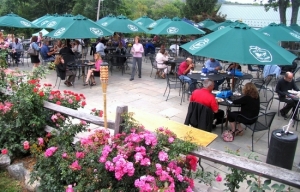 Once again, there were far more entrepreneurs throughout the Town of Warwick who decided to take a risk and expand or open new businesses in 2014 than those who closed their doors.

The Warwick business community saw a record number of new openings and, like most other years, moves, expansions, anniversaries, good news, sad news, a tough winter and a couple of early snowstorms in the fall.

Early in the year we mourned the passing of longtime Warwick business owner Carol Bartnowski, who had spearheaded many worthwhile business promotions and community events.

That’s a lot of ribbon
Michael Johndrow, executive director of the Warwick Valley Chamber of Commerce, reported attending 53 ribbon cuttings for grand openings and anniversaries this past year (there were 28 in 2013). And not all ribbon-cutting ceremonies involved new businesses.

For example, official ribbon cuttings with local officials and chamber members participating were in order when:

The Warwick Foundation for Excellence in Learning was granted non-profit status;

The new Farm Alliance was introduced at Pennings Farm Market; and

The chamber celebrated the completion of its new fence outside the South Street “Caboose” office.

Other ribbon-cuttings celebrated expansions, changes in ownership or management and consolidations.

Among the best weekend getaway places

It was also the year when Warwick was named among the 10 best getaway weekends in USA, when downtown merchants organized an ice bucket challenge in support of ALS (Amyotrophic Lateral Sclerosis) and when Grappa Ristorante raised more than $5,000 at a barbecue for Back Pack Snack Attack.

Chamber membership now stands at 528, with 87 members joining during 2014. That’s the same number of new members who signed up in 2013.

In 2014 participating merchants and organizations held the third annual Pink Friday to support breast cancer research along with traditional celebrations of the Sidewalk Sale, Ladies Night Out, Queen for a Day, Free Music in the Courtyard and the third annual Gingerbread House Contest.

We know. We haven’t mentioned everything but let’s not forget the visits by Santa, the free horse and wagon rides and Home for the Holidays.