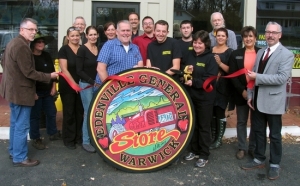 It was an International Harvester dealership until 1972.

The building, located in the center of Edenville, at 240 Pine Island Turnpike, was built in 1952 by Frank Walter. And in 1986, Walter’s son Joseph and his wife, Debbie, purchased it.

For many years they rented out the deli area but when the last tenant moved out, they decided to open their own deli/market.

On Friday, Oct. 31, Town of Warwick Supervisor Michael Sweeton, Michael Newhard and members of the Warwick Valley Chamber of Commerce joined Joe and Debbie Walter, their family, friends and staff for the grand opening of the Edenville General Store.

“Ever since the Edenville Country Store closed in 1987, ” said Debbie Walter, “there had been a huge void in Edenville. We wanted to fill that void. There is an abundance of parking. And also, we have all homemade salads, soups, special dinners including homemade gluten free meals along with many other items. We have Boar’s Head, JB Marshall coffee, tobacco products, ice-cold beer and beer on tap.”

Walter reported that the store will soon have TV’s for sports in the evening along with a menu featuring eight-ounce burgers, wings, quesadillas, salmon and other specialty items.

“The Edenville General store,” she said, “is striving to meet the needs of the local area residents. We want the locals to come to the store and pick up essentials for about the same price as the big stores. The community is one of the most important things to us and giving back to our community is essential.”