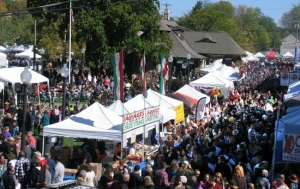 Perhaps it was the picture perfect weather or the increasing notoriety but by all accounts the 30,000 estimate for the annual celebration of Applefest on Sunday, Oct. 5, needs to be revised upwards.

Perhaps it was the picture perfect weather or the increasing notoriety but by all accounts the 30,000 to 35,000 estimates for the annual celebration of Applefest on Sunday, Oct. 5, need to be revised upwards.

“I think this is the largest crowd we’ve ever had,” said Michael Johndrow, executive director of the Warwick Valley Chamber of Commerce. “We’ve had large crowds since early this morning, even well before the official start of the event.”

Johndrow also credits a decision by the Applefest Committee last year to consolidate the attractions by placing vendors, who would normally be in or outside of Lewis Park, to stations along South Street extending up to the vendor and carnival area in Stanley Deming Park.

The traditional festival has been held since 1989 to celebrate the local apple harvest.

250 vendors
This year, Applefest again played host to about 250 craft and food vendors and there was free entertainment, children’s rides and a traditional apple pie contest.

The popular festival is a major fund raiser and much needed proceeds from the event are used for townwide community projects and non-profit organizations.

In spite of the magnitude of the event, the largest in Orange County and one of the largest in the country, Applefest is surprisingly cost effective.

Members of non-profit organizations perform numerous tasks before and after the event.

The final tally for this year’s event, however, will not be available for several weeks.

Although the day can be an inconvenience to some residents, the mo ney earned are used to support valuable services for everyone throughout the year. And many of these services would normally have to be paid with additional taxes or donations.