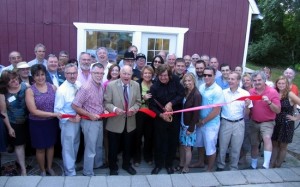 Advertisers and fans of Warwick Radio WTBQ (1110 AM/93.5 FM) may not be aware that for almost two years, the now popular local station on FM, AM and Internet was completely off the air.

But on July 1, 1994, current owner Frank Truatt, who had purchased the station from recording artist Jimmy Sturr, put WTBQ back on the air. And the rest is history.

On Tuesday, July 1, State and local officials, members of the Warwick Valley Chamber of Commerce, associates, advertisers, broadcasters, staff and fans gathered at the station’s studio, 179 Sanfordville Road, to celebrate the 20th anniversary of the revival of the station under his able stewardship.

Warwick resident and media entrepreneur Ed Klein, who passed away in 2008, founded WTBQ. The station began broadcasting on July 29, 1969.

At that time, Klein was also the publisher of The Warwick Advertiser.

In the late 1970s, he sold the station to “Polka King” Jimmy Sturr who, in turn, sold it to Goodtime Broadcasting. Sturr regained ownership in 1992.

Frank Truatt grew up in Bergen County, New Jersey, listening to New York radio and he remembers that he always enjoyed the music of the radio DJs. While attending Clarkson College of Technology in Potsdam, Truatt discovered that the school had it’s own radio station and that it was located in the basement of his dorm.

“Within a few weeks,” he recalled, “I was on the air with my own show on Saturday mornings from 6 to 9 a.m.”

During his years at Clarkson, he also worked on the college’s other radio station, eventually becoming music director and then station manager.

Truatt earned two bachelor of science degrees in Industrial Management but he admits that as he began his business career he was heartbroken about giving up his radio shows to join the “real world.”

In 1981, a co-worker introduced him to the program director at a local station in Sussex County, N.J. Truatt was hired part-time but he longed for a regular scheduled time slot. He began working at other stations in New Jersey and New York while also managing his own mobile DJ service. When he learned that his last station employer would be changing over to an all satellite format, and that live, local DJs would no longer be needed, he decided to see if any nearby stations were for sale. WTBQ’s name came up. Truatt was familiar with the station as he had once worked there. And since WTBQ had been off the air when Truatt purchased it from Jimmy Sturr, there was lots of work to be done.

In the course of its long history, WTBQ moved from Warwick to a longtime studio in Florida, to Ronald Reagan Boulevard in Warwick and then, in 2012, Orange County’s WTBQ Radio held its official grand opening at the station’s new and current studio facility on Sanfordville Road.

Throughout the past 20 years, Truatt has greatly upgraded WTBQ’s broadcast quality, doubled the AM station’s power, was one of the first stations in the region to broadcast on the Internet and added an FM frequency.