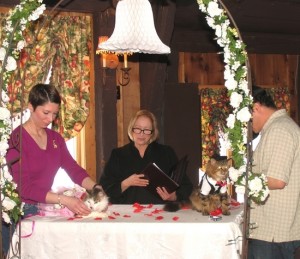 Dena Feneck, one of the Society’s consistent cat volunteers was matron of honor and Animal Control Officer Tom Neely was the Best Man. Town of Warwick Justic Nancy De Angelo, officiated and personalized the ceremony with lots of cat humor that brought much laughter making this a memorable first time event.

On Sunday, February 23, The Landmark Inn was filled to capacity with guests who had come to witness the marriage of “Nanci Catz & Angelo Felinee” in a catrimony ceremony.

Guests paid a $25 attendance fee and the fund raiser, the first of the year, raised more than $3,100 with more “gifts” expected for the newlyweds and a home for their honeymoon and life.

Shelter volunteer Walter Ross gave away the bride. Dena Feneck, one of the humane society’s consistent cat volunteers, was matron of honor and Animal Control Officer Tom Neely was the best man.

Warwick Town Justice Nancy De Angelo officiated and personalized the ceremony with lots of cat humor that brought much laughter.

Sparks fly at first blush
Suzyn Barron, president of the Warwick Valley Humane Society, explained that the bride, Nanci Catz, is an eight-year old female feline who was rescued from a local dairy farm on July 16, 2010, as a friendly but unwanted stray.

The groom, Angelo Felinee, is a two-year old tomcat found wandering the streets of Tuxedo who came to the shelter on May 21, 2013. The two met while in residence sparking their May-December companionable relationship. Both were exposed to the Feline Immune Virus (FIV) while living outside and have tested positive but remain healthy and are looking forward to sharing their lives.

During the ceremony, Barron, who is also a professional singer, sang “Memories” from the Broadway musical, “Cats.” However, she performed the song in the feline language, which has only one word, “meow.”

A humans-only sweet reception and Champagne toast followed while the newly weds retired to a “rose garden” created just for them.

Volunteers and donations
Landmark Inn chef/owner Michael DiMartino donated the use of the restaurant, the champagne, the chocolate topped brownies, an assortment of cookies, coffee and tea and the restaurant staff.

“A very good time was had by all,” said Barron. “No one had ever attended a catrimony and may never get the chance to attend another. We are so grateful to Michael DiMartino for being a charming and generous host who made sure everyone had a taste of Carlos’ Bakery wedding cake, made by Buddy Valastro, the Cake Boss, just for Nanci and Angelo. The afternoon was filled with laughs and smiles all around making it a very successful event.”

Essential information
The shelter currently has 135 cats and kittens and is need of canned ground cat food and adoptions.

In lieu of gifts, the couple requests a “Home for their Honeymoon,” or donations be made in their name to the Warwick Valley Humane Society P.O. Box 61, Warwick, New York 10990.