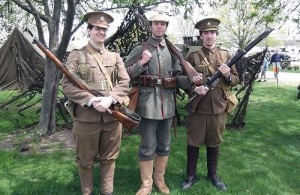 World World One re-enactors John Van Vliet, John Kish and Tom C. Carton use authentic uniforms, weapons and equipment in their efforts to keep the efforts of so many soldiers historically significant.

On Saturday, March 22, Museum Village will host a commemoration to the 100th anniversary of the beginning of World War I.

The United States joined the conflict on April 6, 1917 and played a major part in ending the war. More than 9 million soldiers were killed and 21 million wounded.

Program
To pay tribute to this Great War and the men who fought and the lives lost, Museum Village will have various demonstrations of military life and equipment on the green.

There also will be several re-enactors representing this period in our history.

At 1 p.m. there will also be a presentation on food preservation and rationing by Sarah Wassberg

At 3 p.m. Tuxedo author William Lemanski will discuss the British involvement in Mesopotamia.

In addition, several exhibits including an original uniform and several posters will be on display.

The gift shop and snack bar will also be open.

Essential information
The commemoration will be held from noon to 4 p.m.

Every visitor will also receive a free pass to the Museum’s Opening Day on Saturday, April 12.

For more information about the program and Museum Village itself, visit online at www.museumvillage.org.