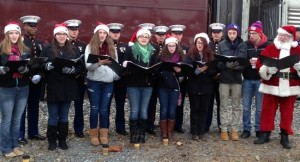 On Sunday, Dec. 8, a diesel locomotive pulling a train of railroad cars made a stop in Warwick on its way to Walden.

It was the U.S. Marine Corps Reserve’s Toys for Tots Special and the stop was an opportunity for volunteers from Warwick and other Orange County communities along the way to deliver the boxes of gifts they had been collecting during the holiday season.

Santa was also on board and happy to pose for photos with well wishers.

Its mission was to collect donated toys for the U.S. Marine Corps Reserve Toys for Tots Foundation. Last year more than 10,000 toys were collected on the train.

All toys were distributed to needy families in the area. Along the route, the train stopped at five locations in the Hudson Valley where community volunteers dropped off toys, visited Santa, learned about railroad equipment, and met members of the Marine Corps in full dress uniform.

In Warwick the train stopped near the Warwick Valley Chamber of Commerce “caboose” office and next to the Chase Bank parking lot.

Volunteers from the Warwick Fire Department helped to load the train and were among several other organizations on hand for the event.

After reaching its final destination the train was unloaded and all the toys were trucked to Stewart Airport for distribution.