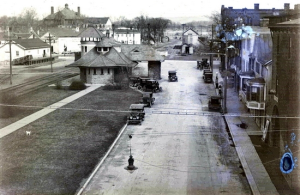 This early 20th Century photograph shows Railroad Avenue in the Village of Warwick. The Warwick Institute, which was on High Street (the large building in the background), burned in the early 1950s. It is one of the images including in the historical societyís program ìOn The Streets Where You Live, An Historic Photographic Ramble Through Warwick Villages and Hamletsî scheduled for Tuesday, June 4, at the A.W. Buckbee Center.

The Warwick Historical Society will host “On The Streets Where You Live: An historic photographic ramble through Warwick villages and hamlets” on Tuesday, June 4, at 7 p.m. at the A.W. Buckbee Center.The early roads of Warwick often followed Native American trails before they grew into the roads known today. King’s Highway, a completed public highway by 1734, closely follows an old Algonquin trail connecting Danskammer (near New Windsor) with another Algonquin center near Philadelphia.

From Wawayanda Path to Colonial Avenue

Early on, it was known as the Wawayanda Path, but locally it has been called by several names over the years.  On the Beers Atlas of 1875, it is called Hudson Street. It then became East Main Street, per the Mueller Atlas of 1903, but by 1904 it officially became Colonial Avenue as it is known today.

Many examples of early buildings, along with an occasional arrowhead or other early artifact, can still be found along the way.

These early roads gave rise to all of our Warwick villages and hamlets and the railways soon followed.

Cathyrn Anders, archivist volunteer for the Warwick Historical Society, will share this evolution through a photographic ramble along some of the highways and byways of early Warwick.

Anders will include landmarks both lost and still standing, as well as images of hotels and taverns, means of transport and bridges.

The society’s map collection, particularly the 1875 and 1903 Atlas maps, will be used to convey snapshots of the growth of the town’s villages and hamlets.

Tickets Since space is limited; reservations are requested by calling 845-986-3236 or joining the Facebook event page. Tickets will be  $10 per person at the door. Complimentary wine and refreshments will be served.