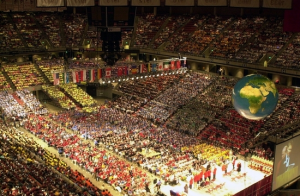 More than 20,000 students and supporters from around the world attended the 33rd annual Odyssey of the Mind World Finals competition last May at Iowa State University. This photo was taken at the closing ceremonies.

A team named the Warwick Valley Community Center – representing Warwick-area students – has earned the right to compete in Odyssey of the Mind (OM) world competition at Michigan State University in East Lansing at the end of May.

The team earned second-place honors in the Division II category for its creative presentation of the problem, “It’s How You Look at It,” at the OM state competition this past weekend at SUNY Binghamton.

The Warwick Valley School District has discontinued funding for activities such as Odyssey of the Mind for budget reasons. Sponsored by the community center, OM team members and their families fund raise funds to cover travel and other expenses.

The team created and presented an original humorous performance that included two characters that act naturally – to them – but odd to those around them. One scene established the “normal” behavior of one character that, at some point in the performance, found itself among others who reacted to the out-of-place behavior.

The other character’s behavior had to stand out as well, but this character had to end up in setting where its odd behavior was considered normal.

The performance also included a meter that indicated the degree of odd/normal behavior and a creative scene change.

A team named the Goshen Middle School Team A, representing the Goshen School District, earned first place for this question and in this division with a total of 332.15 points out of 350. Its total points included a perfect score of 200 for the long-term component and 84.21 for the spontaneity part of the presentation.

According to OM rules, both the first and second place teams are invited to world competition.

In this category’s case, the team from Voorheesville Middle School tied for second place with Warwick – with a total of 316.71 points – which means these three teams are eligible for world competition.

Odyssey of the Mind is an international educational program that provides creative problem-solving opportunities for students from kindergarten through college.

Team members apply their creativity to solve problems that range from building mechanical devices to presenting their own interpretation of literary classics. They then bring their solutions to competition on the local, state, and world level.

Thousands of teams from throughout the nation and from about 25 other countries in Europe and Asia participate in the program.