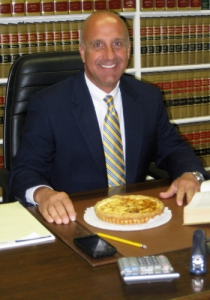 Warwick attorney Bob Krahulik is among the people participating in the new marketing campaign for Jean-Claudeís Artisan Bakery that seeks to answer the question: Do real men eat quiche?

Remember the 1982 best-seller, “Real Men Don’t Eat Quiche?” Well here in Warwick, apparently real men do eat quiche according to a quick poll of some notable Warwick men – especially if that quiche is from Jean-Claude’s Artisan Bakery.In a new marketing campaign designed by Creative Vision, men from throughout the Warwick Valley will be featured with a quiche on Jean-Claude’s Facebook page.

“We’re gathering some noteworthy men from the area who are having their photos taken with their favorite Jean-Claude’s quiche,” Jean-Claude’s manager Annette Sanchez said in a press release announcing the program. “As we prepare to sell your favorite quiche at the Warwick Valley Farmer’s Market, we look forward to using local ingredients as soon as they are in season.”

Jean-Claude’s will be at the market starting on May 19.

Each week a new quiche-loving man will make his Facebook appearance on Jean-Claude’s Facebook page. A dozen photos have already been taken including that of Mayor Michael Newhard, attorney Bob Krahulik, Town Supervisor Michael Sweeton and others.

Varieties include ham and bacon, mushroom and pepper, spinach, broccoli, eggplant and leek quiche. “Crust in us” is Jean-Claude’s motto and each quiche features his  signature crust.

Essential information For more information, call Jean-Claude’s Artisan Bakery at 845-986-8900, visit online www.jeanclaudesbakery.com or on Facebook. The  bakery also has a Greenwood Lake location at 122 Windermere Ave. or call 845-595-6580.